A Star is Born

Hi guys, so I know I haven't been around as much as I'd like to, but I've been crazy busy costuming Cobb's Carnival of Dreams. https://cobbscarnivalofdre.wixsite.com/carnvialofdreams With that said today I'd like to talk about the Evolution of the Bearded Lady!

The Bearded Lady was the first costume I ever made for this oddball show centered around a Haunted Circus, and it just seems appropriate that she's the one I would kick start this whole thing off with.

So quick backstory Aaron and Candy Buck are the son and daughter of my high school Drama teacher Mr. Buck, he had already passed away when I 'joined the team' but that's how I came to know them. There's a lot more to that story but for now we'll leave it at that, because that's not the story of the day. Story of the day begins in 2015, I'd done a some modeling for Candy and what not, I don't remember if I had already done the calendar for Macabre Memories at this time or not but we had a pretty good working relationship at this time. And they knew me from my work with their dad, and I think I'd gone up to Anaheim for a couple parties (I was still in Fallbrook at this time.) Candy had sent me a message asking me to make her some vintage looking undergarments, for the role she was playing in a haunted house they installed in the backyard. Cornelius Cobb's Carnival of Dreams! I saw they were collecting donations and figured that would be my donation so I went ahead and made her the costume.

I used a 100% cotton muslin to make the Bloomer, Chemise, and Corset, again I'm not sure which came first, the Monster Pinup Calendar, but if you've read "Our Love is a Ghost" You'll recognize the chemise pattern as being very similar to the one I used on both the Spectral Nightgown (can be found and purchased in my shop) and the Marilyn Baby Doll Pajama set (Also for sale in my shop) Obviously I'm in love with that pattern as I use it all the time. Bloomers and corset were also my pattern, bloomers super simple elasic waistband, elastic at the knee. Corset, I use plastic bones, (one of these days when I'm not crazy busy I promise to post a video of how I do it, because I know you all want to know) her corset has hooks up the front and ribbons in the back, as much as I hate grommets, I put them in because they are faster than loops.

This look was worn in 2015, and 2016, for 2017 we'd lost our house, I went through a mini meltdown over my breakup with the Mad Scientist formally known as Jason Von Rorsh

(yes he made that name up himself) then last year 2018 we rallied and put the show up one more time. We doubled our cast with this new production, and moved the Bearded Lady (also known as Marjorie Bourdeen) from back of house Maze to front and Center Leading Lady of the Stage. Along with the recast the old costume became passe, it didn't really fit the new direction we were going and with the influx of cast members and the number of very difficult costumes I had to build we decided to put her in a sparkly dress and I would come back to costume in the next year.

Well it's next year and True to my word I've created a brand new costume, one Designed to be worn by a star! Well at least that was the goal, I'm pretty happy with it. Really I just re-designed the original outfit, because: I actually liked the original look, also I think it's fun to bring the old character into the new world that I've created. The challenge wasn't to design a bearded lady costume for the stage, if that's the case there are so many directions I could go. The challenge was update the our Bearded Lady's costume for her new role as Diva in the show. See the difference?

Things I really wanted: I wanted to keep it white (idk but for whatever reason I have in my head the star wears white. Could be because in Water for Elephants Reese Witherspoon's Character wears white? Also in the Greatest Showman Jenny Lind wears white, and Christine Daae from Phantom of the Opera wears white when singing Think of Me. See I'm clearly not alone in this.) I also wanted it to simple, don't get me wrong I love big over designed costumes, but the bearded lady had a BEARD I wanted the costume to contrast that by being under-designed. That's why I choose Pearls over rhinestones, and sequins, yes I love both of those things, but pearls don't sparkle or shine, they're more demure than that. And that was really my vision. This ravishing lady in white to step forward, with a voice like a nightingale, who, happens to have a beard.

And now for the good part, how did I do it? For the Corset, I used white Pearled Tulle from Mood Fabrics:

https://www.moodfabrics.com/white-beaded-tulle-322783 The tulle is very difficult to use because the machine can't sew over the beads, so they much be removed from the seam allowance. This was overlayed on top of a white Taffeta from Joann's Fabrics:

The Chemise is made from a white Oraganza from M&L Fabrics in Anaheim, it is the same pattern I use to make both the Spectral nightgown, and Marilyn Baby Doll pajama set found in my shop, its been slightly altered to better achieve my "Vistion" for the Bearded Lady.

The Bloomers (not pictured) Are made from a white satin from WalMart its really cheap stuff 1.50 per yard in their fabric section (no link, in store only) fell apart in my hands, as I was working with it and lined by a white interlock (also could not find online) 1.00 per yard from WalMart in store. These will have to be remade at a later date because of the cheap fabric, but they photograph well.

Lastly the Bustle is made from an Ivory Silk Charmeuse from Joann's which I can no longer find online so it may have been discontinued and lined by white Tulle from Tulle Shop:

https://www.tulleshop.com/products/white-54-inch-tulle-fabric-bolt-x-40-yards?variant=15862810804337&utm_source=google&utm_medium=cpc&adpos=1o1&scid=scplp1996&sc_intid=1996&gclid=CjwKCAjw1f_pBRAEEiwApp0JKI4p_ncxp4YDcxPMoPKwafCf55goRfUyrJfD24MJ9j0HrkDKC5NbLxoCOpMQAvD_BwE The overall effect has a very deconstructed bride look to it. And I may have inadvertently been channeling Christine from Phantom of the Opera.

Like I said before I didn't want to change the costume just update it. I kept the body the same and just changed the fabrics (Chemise, Bloomers, Corset) I did change the corset pattern, instead of an under-bust corset, or even a cupped corset I went with my favorite kind of corset, the Renaissance style that flattens you out and has the long front piece but goes up on the sides. I feel it gives a really attractive but also unique shape, corsets are really big at Halloween time, but this style it uncommon in our modern world because it does the opposite of what people expect when they see a corset ( squeeze your waist and pop out your boobs) this one squeezes your waist and chest and makes a very clean line.

Lastly I added the Bustle more for the dramatic effect than anything but also I wanted her to have a train, and because she's not wearing a dress which is what you would expect from a star. I personally love this piece its Dramatic and Simple and elegant, not over designed.

Below I've included the full photo shoot I had with SoCal Vision Productions also known as Scardiecat Vasquez. Not only does he do photo's but videography as well and is the Host of #HauntTalk so be sure to check him out on Instagram, twitter, facebook whatever social media you prefer and book him for your photo/video needs. 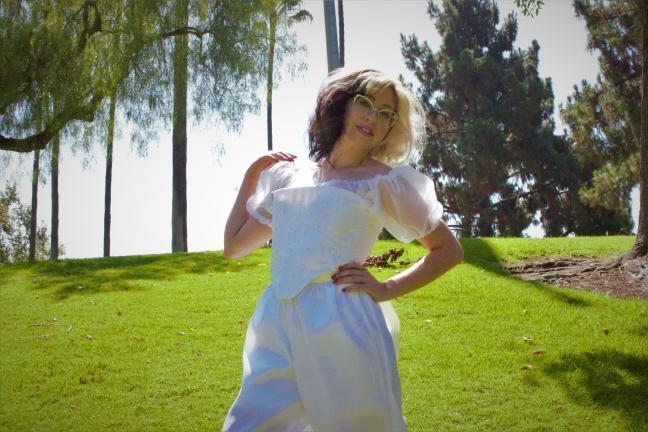 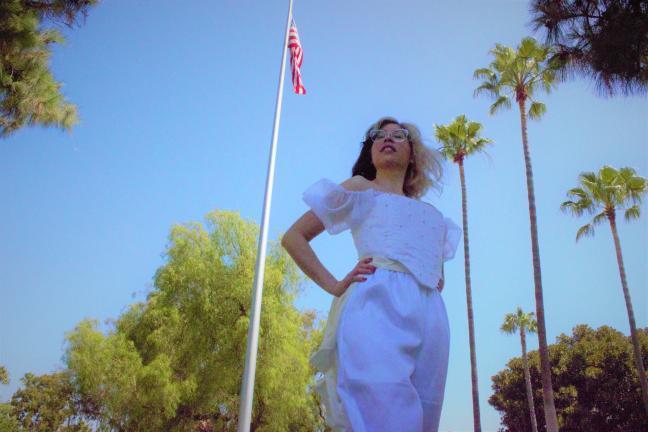 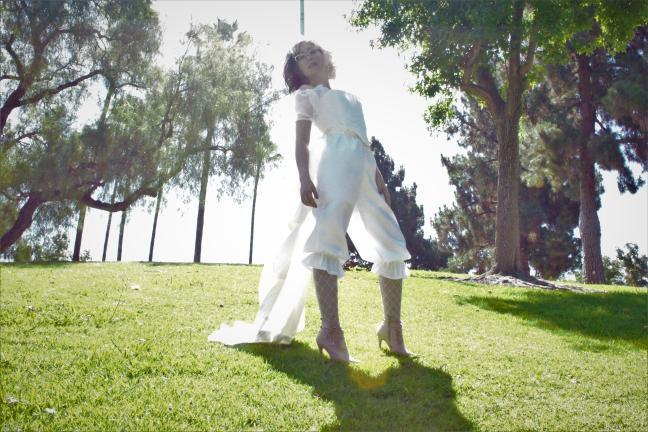 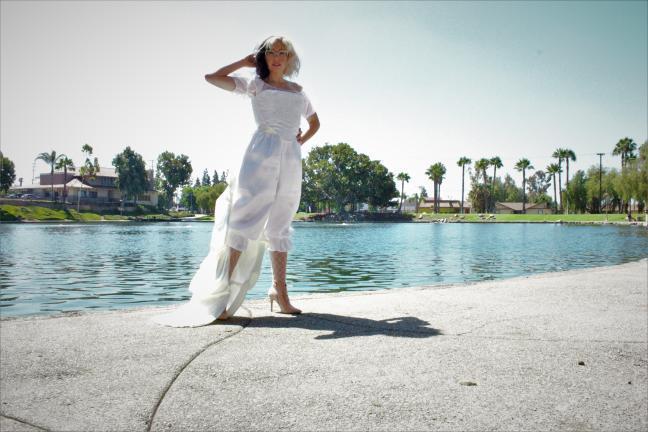 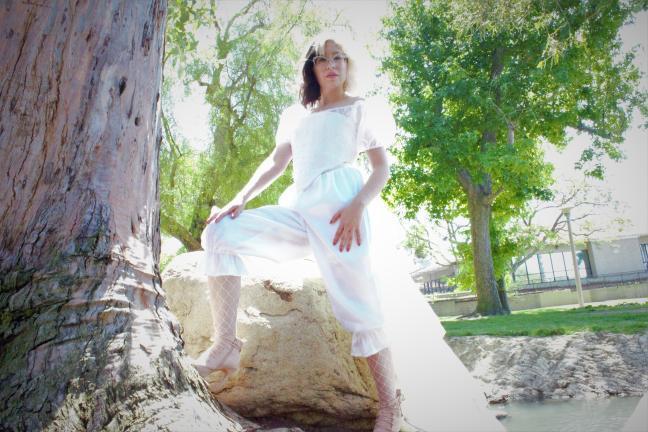 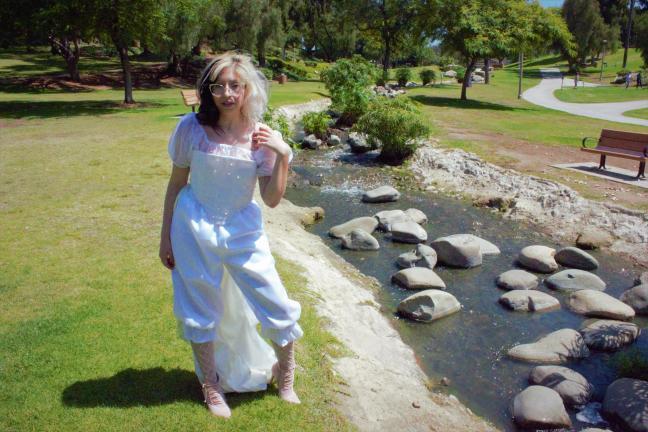 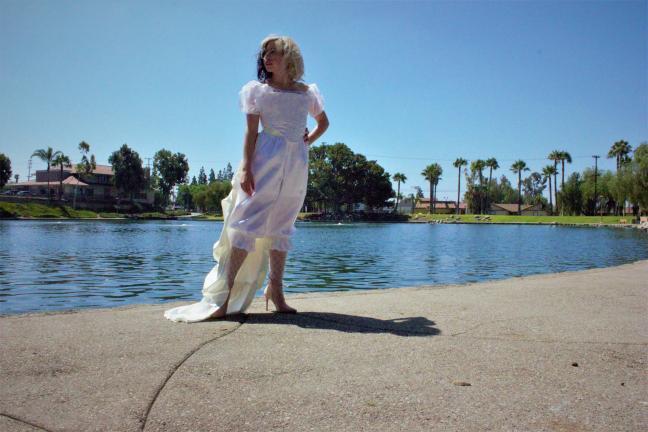 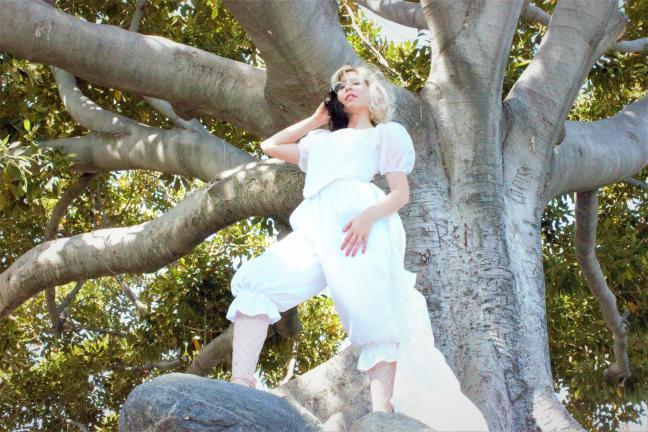 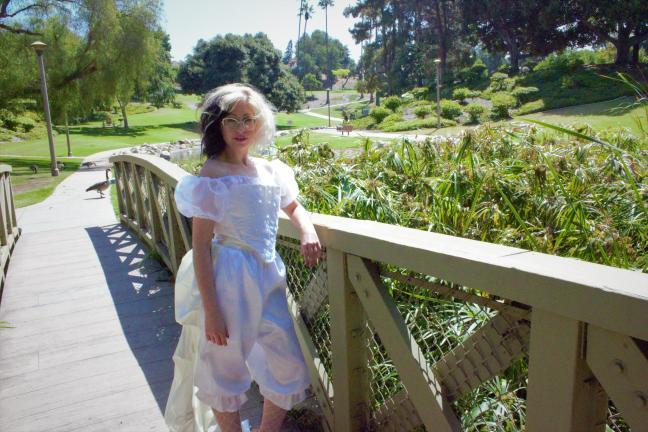 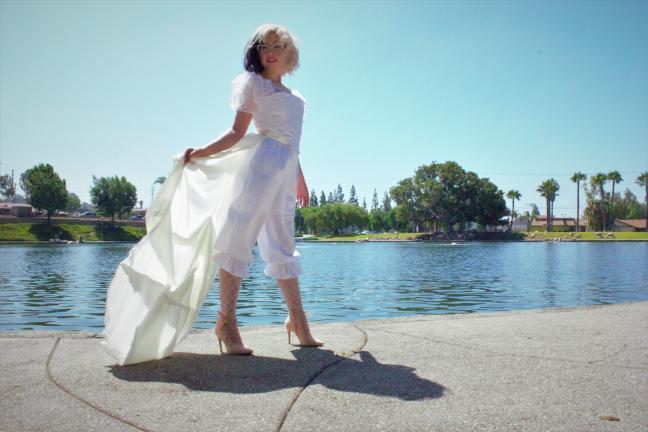 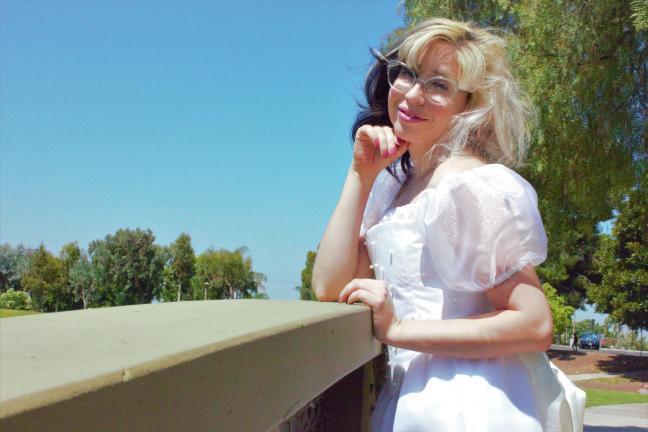 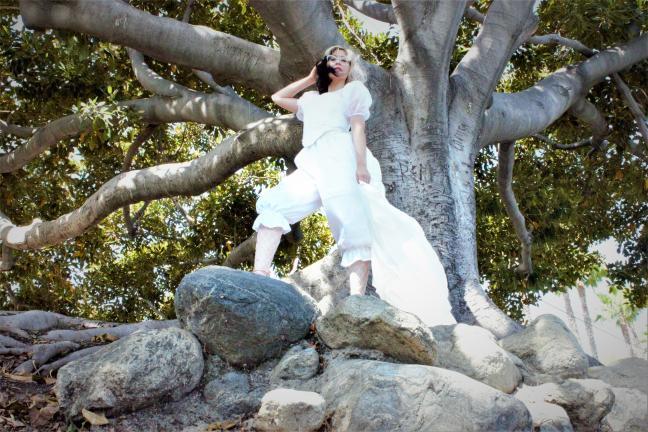 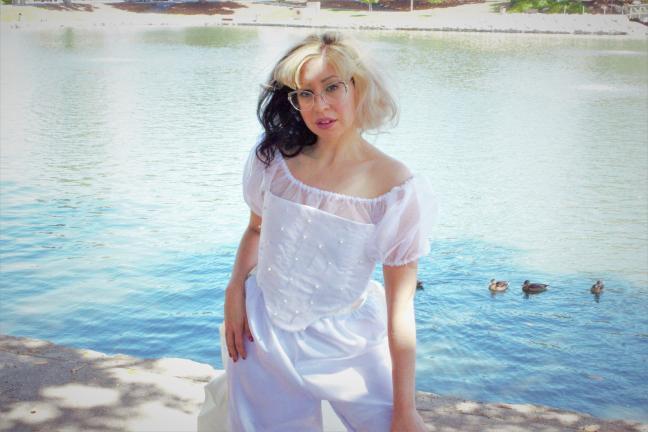 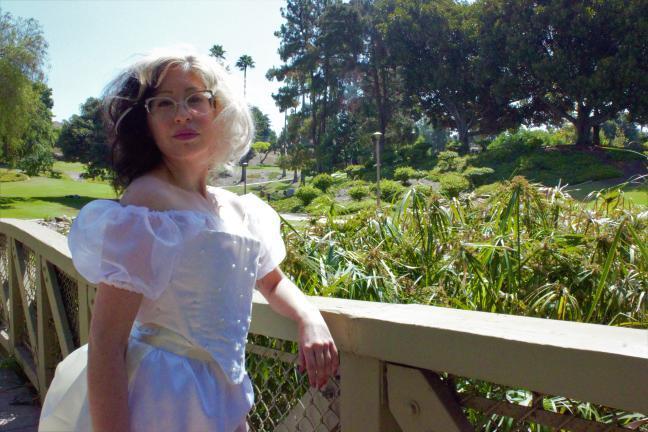 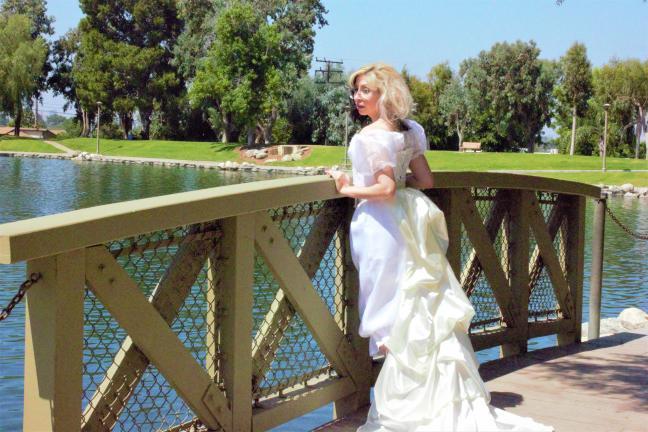 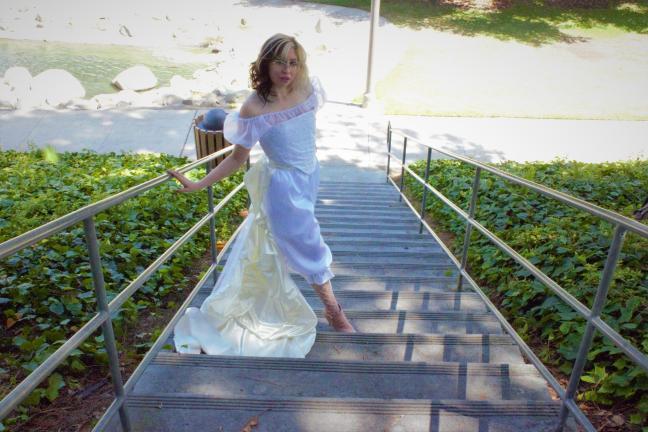 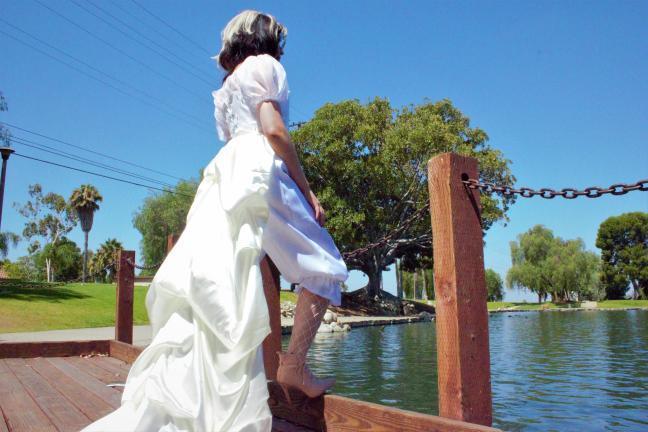 As always it was super fun writing this little thing up, and sharing my costume as well as my love of design with you. Feel free to follow me on any and all social media under MadsenCreations, as well as check out my shop for some really good deals. Remember I specialize in made to orders as well as one of a kinds! So if your a collector of the unique then this is the place for you! Hopefully I can make it back here next week!

You got me Popping Champagne